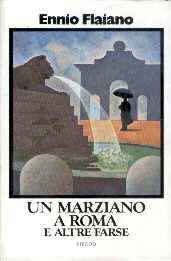 We miss Flaiano. In these uncertain and confused times, in this autumn of the world between global crises and loss of identity, opportunism and new barbarism, we miss him. Flaiano were useful, now, to the whole world but above all to Italians, an ingenious and disenchanted people, still caught in the trap of considering cunning more important than intelligence.
With his wit and his irreverent humour, Flaiano would comfort us in his own way by saying “Come on, the best is past”, and laughing we might remind ourselves that the best must be imagined and constructed, not just waited.
Ennio Flaiano, writer, journalist, humorist, screenwriter, film critic and playwright, has given a precise picture of Italy and of the Italians in their multiple facets. Like a diamond cut, his writing, nuanced, dissected, whipped and mocked our vices and our virtues and did so in the name of a profound and highly personal faith in the word. “I believe only in the word. The word hurts, the word convinces, the word subsides. This, to me, is the meaning of writing. ”
For Flaiano the word is never just a sound or a graphic expression of a concept, it is first and foremost itself a show: comedy, tragedy, farce, a lie which contains innumerable truths. The word is a constant and yet always new and unpredictable performance, staged by the Nearly Stable Company of Life.
But in Flaiano the show of the word never means complacency. It is no coincidence then that he deliberately chose a tight angle to critically observe reality, a sort of border land located halfway between involvement and detachment, passion and humor. Thus he became the “Martian” that he described in his famous story. And his space ship is always subtracted to radar detection and hunting of any flock of ordinary well-meaning groups of people. He saves himself by flying over and detaching from those clichés that he always stigmatized.
“Man is a thinking animal, and thinking makes him soar above the surface. This is my faith. Maybe the only one. But it is enough for me to keep following the show of the world”, wrote Flaiano, and this statement contains a clear position and the confirmation that only the thought, once turned into word, gives us a clue, and a higher knowledge, or at least a free one, not conditioned by clichés.
Flaiano was born in Pescara, the city also of D’Annunzio. The same place can produce these two distant visions of the same circus of lights, shadow plays, sounds, noises, mysterious tunnels and glittering carousels. The same land of Abruzzo creates the bard, the soldier poet, the imaginative creator of verses and slogans, and, a few decades later, the rhetorical desecrator, the caustic man by the appearance of a traveling salesman able to undermine bombastic certainties. Both D’Annunzio and Flaiano share a voracious passion for the speech, a manic attraction and two very different and yet inimitable forms of acrobatics.

In A Martian in Rome, Flaiano wrote: “The word is used to hide the thought, and thought to hide the truth. And the truth strikes those who dare to face her. ”
Better, then, to see truth already filtered by a screen, or from a side, like a movie that uses its fictitious nature to represent reality. Thus trying to make people laugh when it is appropriate to weep, and vice versa, or induce both, though saving themselves from the unbearable gaze of Medusa that annihilates and hides the thought. The first significant event in the life of Flaiano is already in itself a script, written by an author named ironic fate, with an immense sense of humor. He, Ennio Flaiano, the last of seven children of Cetteo Flaiano, arrives in Rome in 1922 traveling on a crowded train of fascists who flocked to the capital on the occasion of the fateful march. Evidently it was perhaps already written that he had to speak about that event, producing a series of anecdotes that photograph that specific era and yet immortalize human characters subtracted to any chronological connotation.
For Flaiano Rome was not only a chosen home city. It was also an inexhaustible source of ideas, gestures, biting sarcasm, harsh inventions and genius. A source from which to draw in small sips, just enough to appreciate the taste without absorbing poisons, small cunning, gossip, and the chatter of the great fashionable circles, carefully dodged.
He enrolled in architecture but did not complete his studies, consistent with that sense of solid and structured elusiveness, true to the nature that he himself admirably summed up with the phrase “With the feet strongly rooted on the clouds”, the motto of his whole existence, reported also on the tombstone placed on his home in Rome.

The script, written by reality, continues when he moved to Viale delle Milizie sharing a room with Orfeo Tamburi. The words, even the names of the streets, seem to pursue his humour, that sentiment to the contrary innate in him. At that time he met among others Mario Pannunzio and Leo Longanesi and began collaborating with various magazines.
He joined the War of Ethiopia, and, even in this biographical event next real horror there will be room for memory and testimony. Years later will born from that experience, written in just over three months, the novel Time to Kill, winner of the first edition of the Premio Strega.
The comic and the tragic meet continously in his life. As his presence at the tables of Roman literary cafes but above all of the restaurants, real stages of fierce and brilliant jokes, testified in a sublime way, for example, by the faithful clients of the King of the Half Portion in C’eravamo tanto amati directed by Ettore Scola.

Flaiano in those years married a teacher of mathematics, as if to give a measure to the flow of anarchist life, but the tragic face of life goes beyond any taxonomic classification, beyond formulas and equations: his daughter Luisa, born in 1942, a few months later shows the first signs of encephalopathy that seriously affected the whole of her existence.
The film world calls him, attraction and natural outlet, in a conflictual relationship, never resolved; this is the ideal place in which to act and set in motion his ideas and paradoxes and on the other end a place of vanity and compromises that he always refused. At first he worked as a film critic for several magazines before landing on the script.
He works with many of the most significant directors of the postwar period, but remains in the memory above all his long and fruitful partnership with Federico Fellini. Two similar characters and yet very different, Fellini and Flaiano, two shynesses comparing, two grumpinesses of different flavor and specific methods of attack and defense. But with the shared pleasure of portraying that side of the world that fascinates and horrifies, the grotesque scrutinized with amused and ferocious attention, perhaps to highlight the surreal side hidden in the depths of each of us and combining like in the melancholy and endless carousel of ” 8½ “.
Flaiano also worked as a journalist. In the sixties he began a period of travels and international relations, in Spain, in Paris (where he wrote for Louis Malle), and the United States (for an Oscar for “8½”), then again in Paris (where he writes a script taken from Proust’s Recherche for René Clément), in Prague and in Israel. He collaborated among others with Blasetti, Monicelli, Antonioni, Scola. 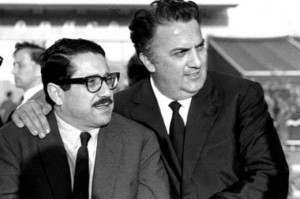 The “bilocation of intelligence”, his way of grasping the ambivalence of the real, has allowed him to see the world without being incorporated, avoiding the approval mechanisms, the commonplace and the apparent golden world of the star system. His being in the reality and yet staying outside, has produced some of the finest screenplays of the Italian cinema of the fifties and sixties, and an endless series of aphorisms that still have the power to portray the character, the way of being and thinking of the Italians.
“The worst that can happen to a genius is to be understood,” wrote Flaiano. Well, I can not say if the Italians have understood his genius too much or too little. How to comment otherwise the news and images of “hard-working” employees who stamp the card in underwear and then go back to bed? Or the apartments rented by the City of Rome to the usual unknown (or known, friends and cousins ​​of other parents of the parents) to the price of a coffee a month? We miss Flaiano’s sharp and salacious criticism like a sailor misses the compass on a stormy sea.
We miss Flaiano. Not for a sloppy exaltation almost hagiographic or a nostalgic memory out of time, but for a solid acknowledgment: the absence of figures able to grasp his spirit and take his heritage. After all, as he himself had predicted, in our country exists a sort of “cult of lack of personality”, and in particular young people “have almost all the courage of the opinions of the others.”
Flaiano, although deeply disillusioned, showed us that you can enclose the world in a story, a sequence of images, or even in a sentence, in which as if by magic you can immediately grasp both sides of the moon. He could make us this gift because he was indeed a Martian coming from irony galaxies and dazed lucidity. He could give it to us because he was able to read reality without succumbing to the banality patina of which it is sometimes cloaked, using the word as a tool to dissect and reconstruct the world.
In these times everything flows quickly, and the highest thought is worth the externalization of a tweet. In this world where people don’t seem to read stories but they all make storytelling, Flaiano’s brilliant synthesis and lucid and visionary foresight would be necessary more than ever. But perhaps, being Flaiano always a step forward or a step to the side of reality, today, with his withering aphorisms, he would probably invite us to rediscover the deeper value of silence, of listening, of reflection.
And perhaps, since he was a genius indeed, once more he wouldn’t be understood. 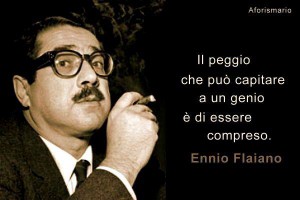 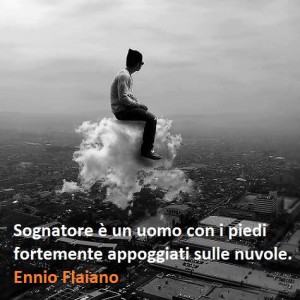